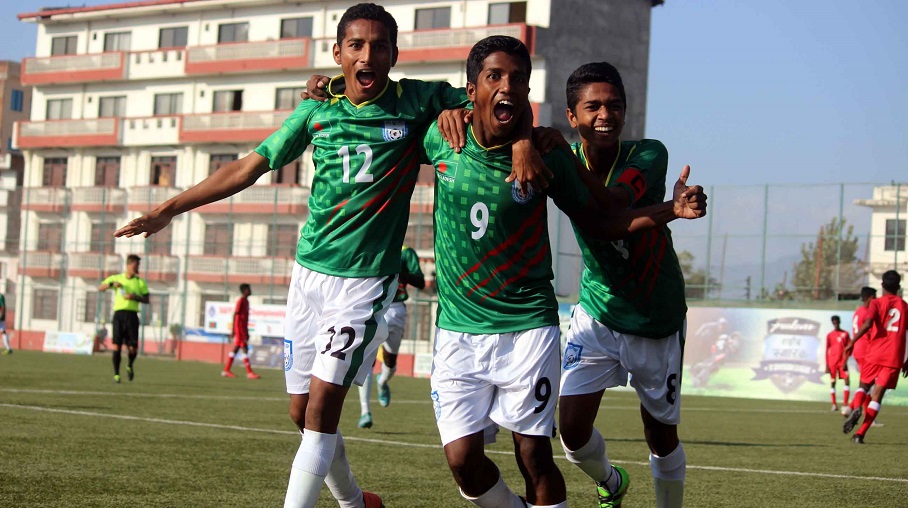 U15 boys toy with Maldives to register 9-0 win

Oct 27, 2018
Facebook Twitter Instagram Mail
Kathmandu: Bangladesh U15 national team has stormed into the SAFF U15 Championship 2018 with a 9-0 victory of Maldives on Saturday afternoon. Playing their first match of the group stage, the Red and Greens hit the ground running straight from the 2:45pm (BDST) kick-off at the ANFA Complex in Kathmandu, Nepal. Prodigy Nihat Jaman Ucchash drew first blood for Mostofa Anowar Parvej’s boys in the 11th minute. Playing his debut international match, the promising forward completed his hattrick within just 12 minutes by scoring in the 20th and 23rd minute. Skipper Mohammad Mahedi Hasan scored in the first minute of added time after the first half to give Bangladesh a 4-0 lead going into the break. After the break, Bangladesh took to the pitch with even more hunger and in the very first minute, Ucchash scored Bangladesh’s 5th and his 4th goal. After merely a minute, Rasel Ahmed added the 6th for the Red and Greens. It was again Rasel who netted past the Maldivian goalee in the 66th minute to make it 7-0. Substitute Ashikur Rahman then came on to net two more in the 80th and 90+4th minute to hand Bangladesh a thumping 9-0 victory in the SAFF opener. With this win, Bangladesh top group A with 3 points from 1 game with a +9 goal difference while Nepal go second despite having 3 points from 1 game also due to an inferior goal difference of +4. On the other hand, Maldives are already out of the competition failing register any win from the two matches they played in which they scored a total of 13 goals. This also means that Bangladesh and Nepal are through to the semi finals with one match in hand. Bangladesh will play their second and final group game against hosts Nepal at 2:45pm at the ANFA Complex in Kathmandu, Nepal on October 29, Monday. The game will determine who will be the group champions and who will be the runners-up.
Previous PostU15 boys keep their feet on the ground
Next PostBangladesh to begin SAFF Championship with Bhutan faceoff