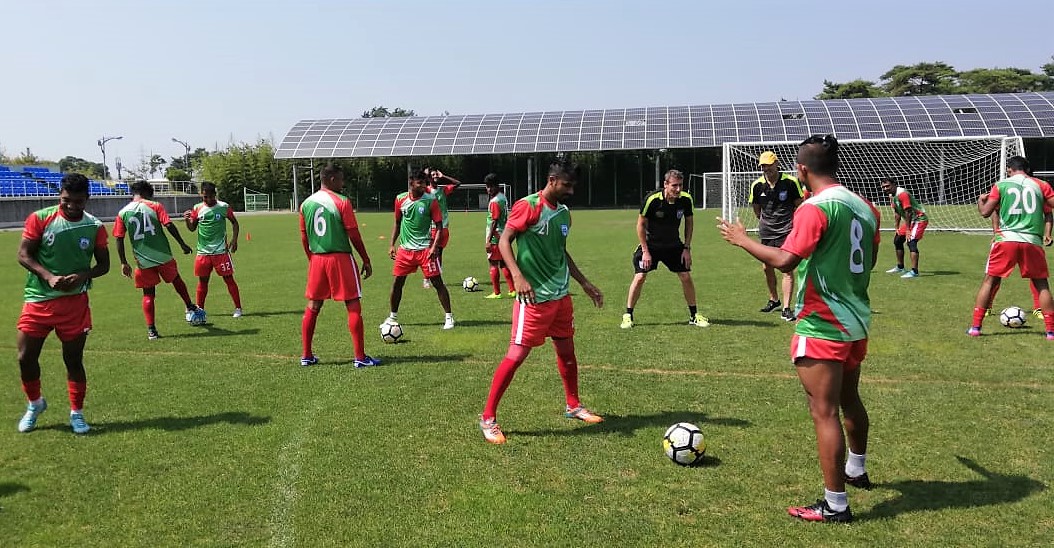 Jul 30, 2018
Facebook Twitter Instagram Mail
Mokpo: The players of the Bangladesh national team are being exposed to two intense training sessions a day in a bid to prepare the players for the upcoming Asian Games football and the SAFF Suzuki Cup. The team is currently in South Korea for a 2-week specialized training camp before the two important tournaments. A 28-man team and the staff reached South Korea at 8:30am (S. Korea Time) on July 28. The team hit the training ground the very next day. The contingent, this time around, has two changes from the squad of the Qatar camp. Mahbub Hossain Roksy, assistant coach of the national team, said that Mamun Mia and Uttam have been dropped from the team while Sohel Rana and Rahamat has been called in for the South Korea camp. Moreover, goalkeeper Sohel and outfield player Jibon have been given tasks to improve their fitness at home before they can join the team camp ahead of the SAFF Championship, he added. From today, the team began to train in two training sessions a day – morning at 10:00am and afternoon at 4:00pm. In the training sessions, the players are working on fitness, technique, tactical aspects of the game, movement on and off the ball, fast counter-attacks and collaborated defending, said Roksy. The management is making sure that the team can use the high end facilities of the Mokpo International Football Center to the fullest. The training facility, currently being used by Korean third tier team Mokpo City FC, has six football pitch. Two are nature grounds, three are artificial turf grounds and one ground for youth. Apart from training at the Mokpo International Football Center over two weeks, the team will also play three practice matches, the first of which will be played on August 1. Head coach Jamie Day and other members of the staff are confident that the two-week training in S. Korea will turn out to be fruitful for the upcoming tournaments.
Previous PostBangladesh lose to Gwangju FC
Next PostBangladesh to begin SAFF Championship with Bhutan faceoff