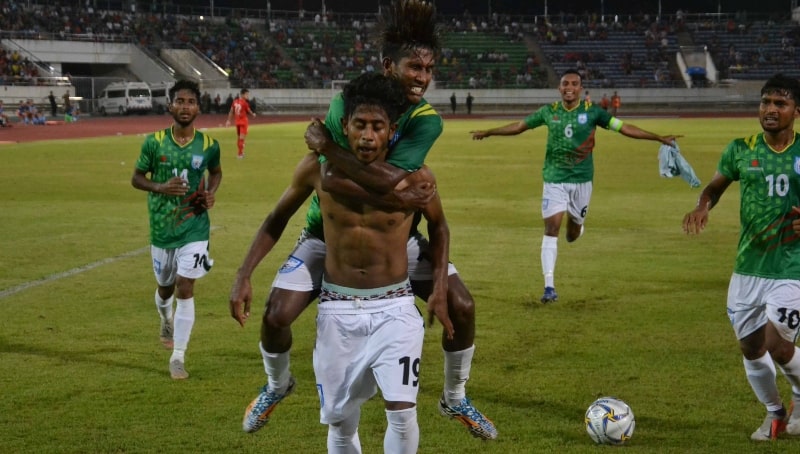 Jun 06, 2019
Facebook Twitter Instagram Mail
Bangladesh national team beat Laos 1-0 in the first leg of FIFA World Cup 2022 and AFC Asian Cup 2023 joint pre-qualifiers Round-1 tie in Vientiane on Thursday evening. Rabiul Hasan scored the only goal of the match for Bangladesh in the 71st minute. From kick-off, Bangladesh was a little cautious to avoid making any mistakes and to understand the game of Laos. However, they slowly started to assert themselves on the game. After a goalless first half, the Red and Greens started the second with a lot more attacking intent. The entry of Rabiul Hasan in the place of Arifur Rahman in the 55th minute was clear indication from Jamie Day that Bangladesh would try to disturb the stalemate. Sure enough, Rabiul Hasan produced a brilliant goal in the 71st minute of the game. He showed his marker the outside before cutting in from the left at the edge of the box and hitting the net with a precisely guided shot. Rabiul, however, had to see a yellow for taking off his shirt while celebrating. His goal was enough though for a crucial away goal and a clean-sheet to take home for the second leg. Rabiul was also adjudged the Player of the Match for his match-winning performance. The second leg will be played at Bangabandhu National Stadium in Dhaka, Bangladesh on June 11.
Previous PostJamal Bhuyan penalized for unbecoming comments
Next PostBangladesh to begin SAFF Championship with Bhutan faceoff