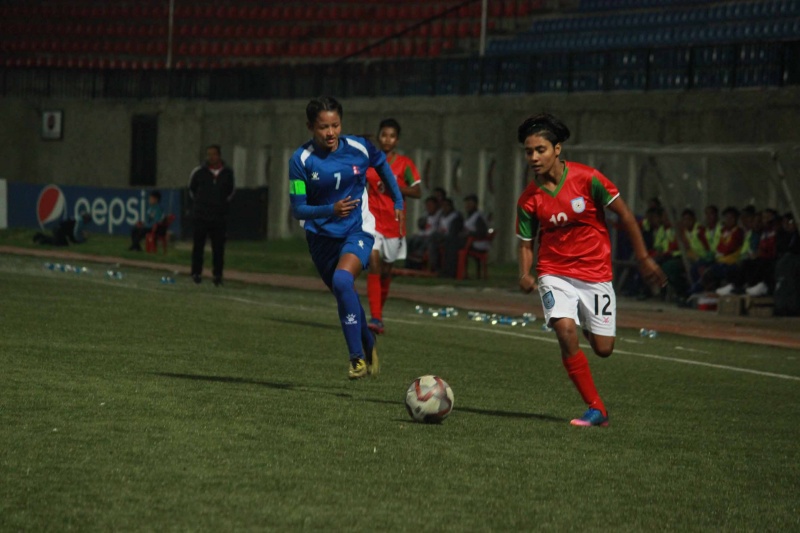 Oct 02, 2018
Facebook Twitter Instagram Mail
Thimpu: After dismantling Pakistan in the first match, Bangladesh have continued the winning streak beating Nepal 2-1 in the last group match of group B in SAFF U18 Women’s Championship 2018 in Bhutan. With this win, Bangladesh girls have topped the group and move to semifinal along with Nepal. Like the first match, Bangladesh stared with an attacking formation and after missing couple of chances, Sirat Jahan Shopna broke the dead lock at the 16th minute. Shopna, who scored seven goals in the first match took her goal tally to eight and becomes the highest goal scorer of the tournament. Krishnarani scored the second the goal for the red and greens utilizing a direct ball from Bangladesh’s goal keeper. Nepal players could not cope up with her pace and the Bangladeshi girl placed the ball at the right side of the post with an excellent finish. Bangladesh could have finished the match at 41th minute but an unfortunate penalty miss did not allow Bangladesh to bag another goal. Nepal found the consolation goal at the 92nd minute as Rasmi Kumari scored from a long range shot. Bangladesh will face Group A runner up Bhutan in the semifinal on October 5 while Nepal will face India.
Previous PostSAFF Women’s U18: Prep for semis in full swing
Next PostBangamata U19 Women’s Int’l Gold Cup: Inception of a new odyssey