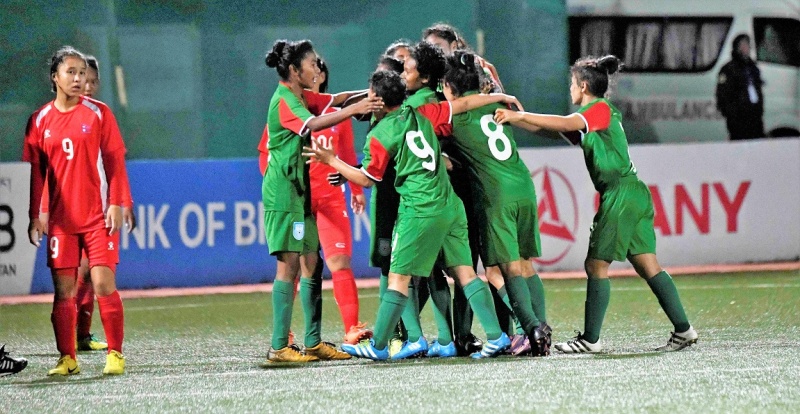 U15 girls through to semis as group toppers

Aug 13, 2018
Facebook Twitter Instagram Mail
Thimpu: Bangladesh U15 women’s national team is through to the semi-finals of the ongoing SAFF U15 Women’s Championship 2018 after beating Nepal 3-0 at Changlimithang Stadium, Thimpu, Bhutan on Monday. The Red and Greens picked up a 3-0 victory over Nepal in the second and final group match of both teams with group championship at stake. Bangladesh started on the front foot straight from the kick off. However, the U15 girls could only break the deadlock in the first minute of the added time at the end of the first half when forward Tohura Khatun headed home a delicious cross after a short corner. The team headed for the break with Bangladesh leading 1-0. After the restart, skipper Maria Manda’s long range left footer gave Bangladesh a 2-0 lead in the 51st minute after a botched headed clearance from a Nepal defender. Then in the 67th minute, Sajeda Khatun pounced on another Nepalese defensive mistake to poke the ball past the late Nepalese goalkeeper to make the scoreline 3-0 in favour of Bangladesh. The final whistle meant that Bangladesh goes through to the semis as Group B champions and will face Group A runners-up Bhutan. The first semifinal between Group A champions India and Group B runners-up Nepal will start at 4:00pm on August 16. Bangladesh will square off against Bhutan in the second semifinal at 7:00pm (Bangladesh time) at the Changlimithang Stadium, Thimpu, Bhutan on August 16, Thursday.
Previous PostNext target: Final
Next PostBangamata U19 Women’s Int’l Gold Cup: Inception of a new odyssey